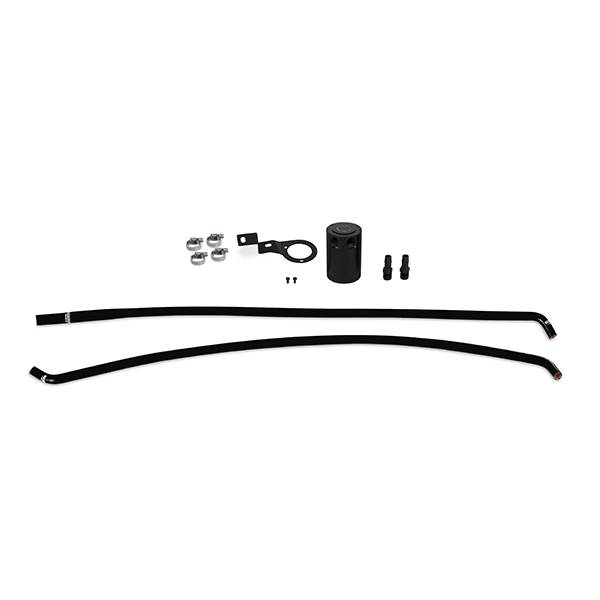 The Mishimoto 2015-2016 WRX PCV Side Baffled Oil Catch Can System is designed and engineered to reduce carbon buildup, a common issue with direct fuel injection engines such as the FA20-DIT. The 2015-2016 WRX oil catch can system includes one Mishimoto Compact Baffled Oil Catch Can, designed to separate oil particles from the PCV air that would normally be routed back to your intake. The internal air diverter increases air turbulence and ensures all the oil sinks to the bottom of the can, leaving nothing but clean air to pass through the 50-micron bronze filter. An internal baffle keeps the collected oil from splashing around under race conditions. The 100% billet, 6061 aluminum cans include two black nylon fittings and direct-fit steel powder-coated brackets which mount the cans in serviceable locations. This makes maintaining your 2015-2016 WRX system a breeze, as the cans are also 100% washable, unlike many others that require you to replace your filtration system. To connect the cans to your PCV system, the Mishimoto 2015-2016 WRX Baffled Oil Catch Can System includes application-specific silicone hoses offered in black, blue, or red, keeping your engine bay looking clean! Whether you are entering your 2015 WRX in the local rallycross, or lapping at your next track day, trust Mishimoto and our line of 2015 WRX parts to keep your WRX cool. This kit, like our entire line of 2015 WRX parts, includes the signature Mishimoto Lifetime Warranty. Our catch cans are different from most air-oil-separator (AOS) systems on a few levels. First, our catch cans are not heated. This means that all the blow-by can condense in the can, including low-octane oil vapors and contaminated fuel vapors. Most AOS systems drain the blow-by back into the oil pan, while our catch cans trap the blow-by and keep it out of the engine permanently. If you?ve seen what we?ve seen in the bottom of our catch cans, you won?t want that draining back into your oil either.